The Turn of the Screw, by Henry James 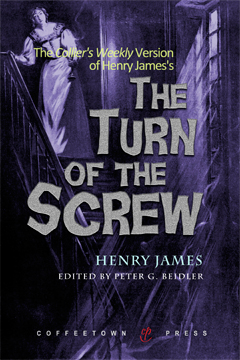 Henry James’s The Turn of the Screw, is one of the most often read, often taught, and often criticized novels in the history of literature.

For the first time since 1898, readers can experience Henry James’s eerie The Turn of the Screw the way his original readers did, as a twelve-part weekly serial. The Coffeetown Press edition showcases the novel as it first appeared, complete with provocative illustrations by John La Farge and Eric Pape, in Collier’s Weekly.

This unique edition, with an analytical introduction by Peter G. Beidler, will of course be valuable to scholars. It will be particularly useful, however, for undergraduate classroom use.

It allows readers to experience first-hand the suspense generated by the week-by-week grouping of chapters.

It also lets them read the young governess’s story of her dangerous encounter with prowling spirits as it first appeared, before James made the 500-odd changes in wording he introduced later. After reading Beidler’s detailed appendix analyzing all of James’s revisions, readers will see that in many ways this earliest version of The Turn of the Screw was James’s best.

Peter G. Beidler spent most of his long teaching career as the Lucy G. Moses Distinguished Professor of English at Lehigh University. He has published widely on Henry James and especially on The Turn of the Screw. His Ghosts, Demons, and Henry James: The Turn of the Screw at the Turn of the Century came out in 1989. He co-edited (with Kimberly C. Reed) the Modern Language Association’s Approaches to Teaching Henry James’s Daisy Miller and The Turn of the Screw (2005). In addition, he edited all three editions, with associated cultural and critical materials, of The Turn of the Screw for the popular Bedford Books series Case Studies in Contemporary Criticism (1992, 2004, 2010). For that Bedford series he presented James’s last (1908) version. For this Coffeetown Press edition he presents for the first time in more than a century James’s first (1898) version as it was serialized in Collier’s Weekly.

Beidler was named National Professor of the Year in 1983 by the Council for Advancement and Support of Education and the Carnegie Foundation. He was named Fulbright Professor at Sichuan University in Chengdu, mainland China, for 1987-88, and the Robert Foster Cherry Visiting Distinguished Teaching Professor at Baylor University, for 1995-96. He now lives with his wife Anne in Seattle, WA. 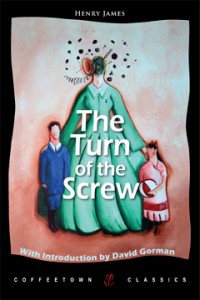 This Coffeetown Press edition of Henry James’s most famous, most widely read, and most frequently taught story presents the text as it appeared in 1908, with the author’s final revisions. The Turn of the Screw, first published in serial format in 1898, is the chilling tale of a young woman who accepts a job as governess—that is, as teacher—of two lovely young children who seem to be haunted by the spirits of a former governess and her lover, both now dead. David Gorman’s introduction is designed to help first-time readers of the tale by providing a brief historical backdrop to this tale of a haunted house and by laying out the central critical controversy that surrounds it: whether this ghost story is not about ghosts at all, or rather a probing of the psyche of a narrator who madly imagines that two ghosts threaten her young charges. 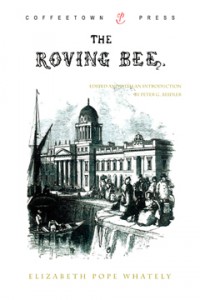 The Roving Bee or, A Peep into Many Hives

Almost totally forgotten since it was published in 1855, Elizabeth Pope Whately’s The Roving Bee is now available for the first time in more than a century and a half. This novel explores in realistic detail the life of an Irish governess. Not only is The Roving Bee a good read, but it reveals in rich cultural detail the tensions in nineteenth-century Ireland, especially those between the rich and the poor and between Protestants and Roman Catholics. The governess Dora Leighton is the “roving bee” of the title. As she “peeps” into many “hives”—the households where she is employed to teach—we readers peep also. Through Dora’s eyes we see highlighted the class differences, disagreements about making the Bible available to the people, the prominence of money, the arrogance of the newly rich, and the frustrations of the eternal poor. We observe the domestic details of everyday life in various nineteenth-century families. We watch gender issues work themselves out. We even hear the Irish dialect of some of the speakers. In his introduction, editor Peter G. Beidler argues that Henry James had probably read The Roving Bee, and that his having done so influenced in interesting ways two of his novellas, The Pupil, published in 1891, and The Turn of the Screw, first published in 1898.

Deception at the Diamond D Ranch, by G.R. Stahl

Wrapped in Darkness, by David Carlson