Chaucer’s Canterbury Comedies, by Peter G. Beidler, is a collection of essays that represents nearly forty years of scholarly research.

“Reading through these pages is a profound reminder of the importance of Beidler’s intelligent, learned voice to contemporary Chaucer and Gower studies, as well as a full immersion in the joy of the scholarly life.”

“Ever the comedian, Beidler loves Chaucer for being funny, and the essays in this volume immortalize his deep affection for a medieval poet who sought to add a little humor to the world.”

“There is no more important living Chaucer critic than Peter G. Beidler. Everyone who has taught, written about, or even studied the Canterbury Tales in a scholarly way knows his work and has benefitted from it …. For many years, Beidler has illuminated areas we did not even notice were dark. Now he has performed an invaluable service by drawing together many of his most important insights in a single, affordable volume. Every Chaucerian will want Chaucer’s Canterbury Comedies on her bookshelf.”

The written and spoken voice of Peter G. Beidler is well-known to scholars interested in Geoffrey Chaucer’s comic tales. In this gathering of essays old and new, Beidler articulates his views on the literary relationships of Chaucer’s most widely-read and often-taught tales—those of the Miller, the Wife of Bath, the Shipman, the Merchant, and the Pardoner. He discusses in clear language not only the most likely sources for these tales—their origins—but also the many changes Chaucer made in transforming them in accordance with his own purposes—their originality. He explicates key passages to show what a deliberate literary artist Chaucer was. The Foreword by Holly A. Crocker will help readers connect the strands that unify Beidler’s approach to the bawdy/body tales he discusses in Chaucer’s Canterbury Comedies.

“The first of these essays was published in the early 70s,” Beidler says. “There are twenty articles, including one that has not been published elsewhere. It has been fascinating for me to look back and reflect, in newly-written head notes, upon why I wrote each of these articles. My next project will be a shorter book—all new material—that focuses exclusively Chaucer’s ‘Miller’s Tale’—its sources, its flowering in the hands of Chaucer, and its various post-Chaucerian reincarnations.” 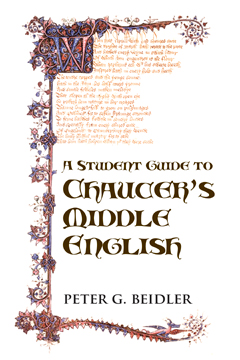 “I have been using an earlier version of Beidler’s booklet for several years in Chaucer courses, medieval survey courses, and pronunciation workshops. It is an indispensable component of my course materials. This guide enables students to read Chaucer aloud with confidence within a few weeks.”

“This is a direct, clear, and user-friendly introduction to the sound of Chaucer’s language, as well as to aspects of Chaucer’s vocabulary and principal metrical form. Intended for beginners in Chaucer studies, it will serve also as a handy refresher and reference for many medievalists. Pete Beidler’s trademark humor, as well as his career-long concern for student learning, is evident on every page.”

“Beidler’s long experience as a teacher really shows in the Student Guide to Chaucer’s Middle English. Because he takes nothing for granted, in thoroughness, precision, and tone, his explanations are suitable for any beginner, from high school through college. His introductory chapter makes the case beautifully for reading Chaucer in his own language, and the rest of the booklet lays out the essentials clearly, concisely, and entertainingly, so that students can indeed learn to understand and pronounce Chaucer’s Middle English.”

A Student Guide to Chaucer’s Middle English shows where Chaucer’s English came from, when it developed, and especially how to pronounce it. The guide contains information on the International Phonetic Alphabet, iambic pentameter, and the Great Vowel Shift. It also has word lists and transcription exercises. Refined during four decades of Beidler’s own teaching, this booklet is now widely available for the first time.

Peter G. Beidler is the Lucy G. Moses Distinguished Professor of English, emeritus, at Lehigh University. In his long career, he has published more often in the Chaucer Review than any other scholar. He is the author of The Wife of Bath in the Bedford Case Studies in Contemporary Criticism series, Masculinities in Chaucer, and some twenty other books on various literary and pedagogical subjects. He was a Fulbright professor at Sichuan University in mainland China and as the Robert Foster Cherry Professor at Baylor University in Texas. The winner of several teaching awards, he was named national Professor of the Year in 1983 by the Council for Advancement and Support of Education and the Carnegie Foundation. He now lives in Seattle, Washington.

Caught in the Snare of the Hunter, by David Carlson

Dancing with the Muse in Old Age