Civil to Strangers and Other Writings, An Academic Question, and Crampton Hodnet, by Barbara Pym

When Barbara Pym died in 1980 she left behind several complete but unpublished novels, half-finished works, short stories and many other papers. These were only available in the Bodleian Library in Oxford to scholars. Thanks to Pym’s friend, biographer, and colleague Hazel Holt–author of the much-loved Mrs. Malory Mysteries–three of these complete novels and assorted excerpts were published posthumously in the 1980s. In recent years they have only been available in the UK. Now Coffeetown Press is proud to bring them back into print in the U.S.A. and Canada.

In her introduction, Hazel Holt writes, “With the publication of these novels I am delighted to say that now all Barbara’s novels are back in print (and as eBooks) in the UK, the USA, and Canada. In 1977, the magic year of her rediscovery, she wrote in her notebook, ‘Who is that woman sitting on the concrete wall outside Barclay’s bank, reading the TV Times? That is Miss Pym the novelist.’ That is the only legacy she would wish to leave behind. I hope, in some small way, I have helped to achieve it.” 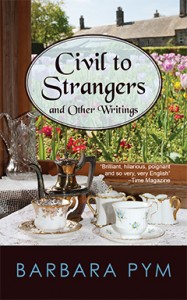 **Click the cover image to buy the trade paperback online. Or read it on your Kindle or Nook.**

Thanks to his wife’s money, Adam Marsh-Gibbon leads a charmed life writing poetry and novels celebrated mostly by his fellow residents in the town of Up Callow in Shropshire, England. His lovely wife Cassandra caters to his every whim, although perhaps not as enthusiastically as five years earlier, when she first married her handsome yet difficult and unappreciative husband.

Into their lives steps Mr. Stefan Tilos, the new tenant of Holmwood, a dashing Hungarian who puts the whole town in a flutter. How alarming then, that he should become so visibly enamoured of Cassandra. Mrs. Marsh-Gibbon is certainly above reproach. Or is she?

Barbara Pym wrote Civil to Strangers in 1936. It was first published posthumously in 1987, thanks to her friend and biographer Hazel Holt.

**Click the cover image to buy the paperback online. Or read it on your Kindle or Nook.**

“The rare charm of Crampton Hodnet is in the glimpse it offers of Pym’s imagination as it pauses for a moment in perfect understanding of a character. That sympathy stretches beyond the horizon of comedy.”

Life has a certain reassuring if not terribly exciting rhythm for the residents of North Oxford. Miss Morrow is content in her position as spinster companion to Miss Doggett, even if her employer and the woman’s social circle regard her as a piece of furniture. Stephen Latimer, the new cleric and Miss Doggett’s dashing new tenant, upsets the balance for Miss Morrow by proposing the long discounted possibility of marriage.

Miss Doggett’s nephew, Mr. Francis Cleveland, is a handsome, middle-aged professor not destined for greatness in his field. He has a complaisant wife and an adoring pupil, a dangerous midlife combination. The town gossips witness an impulsive declaration of love between Francis Cleveland and Miss Bird and conclude that Mr. Cleveland is willing to sacrifice marriage and respectability for the sake of passion.

Caught in a potentially compromising situation with Miss Morrow, Mr. Latimer clumsily refers to a nonexistent town: Crampton Hodnet. His lie is harmless. In this town appearances are much more deceiving.

Barbara Pym began writing Crampton Hodnet in 1939. It was first published posthumously in 1985, thanks to her friend and biographer, Hazel Holt. 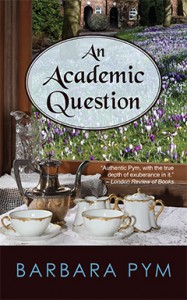 **Click the cover image to buy the trade paperback online. Or read it on your Kindle or Nook.**

‘Authentic Pym, with the true depth of exuberance in it.’

Caro is the wife of Dr. Alan Grimstone, a lecturer at a provincial university in a West Country town in England. She knows her circle believes that she should be doing more with her life. She is the mother of a young daughter but relieved to be able to leave the girl in the care of an au pair. Her one selfless act–reading aloud to a former missionary at a rest home–is sullied when she allows her husband to ‘borrow’ some of the old gentleman’s papers in order to get the better of a colleague. Caro’s sister is a social worker disinclined towards marriage and children, but is she happy? Despite appearances, Caro is content enough. Until she learns that that her husband Alan has a wandering eye.

What is happiness? The knowledge that one is loved? Academic renown? Or is it friendship with eccentric friends and the sight of the first crocuses of spring or the Virginia creeper in autumn?

Barbara Pym completed the first draft of her satirical “Academic Novel” in 1970, ten years before her death. It was first published posthumously in 1985, thanks to her friend and biographer Hazel Holt.

Barbara Pym (1913-80) was born in Shropshire and educated at St Hilda’s College, Oxford. When in 1977 the TLS asked critics to name the most underrated authors of the past 75 years, only one was named twice (by Philip Larkin and Lord David Cecil): Barbara Pym. Her novels are characterized by what Anne Tyler has called “the heartbreaking silliness of everyday life.”

Wrapped in Darkness, by David Carlson

The Last Straw, by Michael Niemann